Navy Seals are known as one of the world’s elite group of warriors. In this article we collected motivational Navy Seal quotes. Enjoy reading! People sleep peaceably in their beds at night only because rough men stand ready to do violence on their behalf. – Unknown

The best way to pay for a lovely moment is to enjoy it. – Richard Bach

I believe in American exceptionalism. As a Navy SEAL, I fought so that I would never have to see my president bow to anyone. – Ryan Zinke

The more you sweat in training, the less you bleed in combat. – Unknown

Fight weak emotions with logic; fight the weakness of logic with the power of emotions. – Jocko Willink

You’re not here to survive this, you’re here to take charge of it. – Unknown Failure is not falling down but refusing to get up. – Unknown

What the SEAL teams do, what our training does, is it chips away the outer that layer and shows you what you’re capable of and not capable of. – Marcus Luttrell

Be sure to taste your words before you spit them out. – Gaelic Proverb

You don’t have to like it, you just have to do it. – Unknown

You must be your very best in the darkest moments. – Unknown Truly – my mind never told me to give up though my body was beaten down. – Stew Smith

Say goodnight to the sun. – Unknown

SEAL training was a great equalizer. Nothing mattered but your will to succeed. Not your color, not your ethnic background, not your education and not your social status. – William H. McRaven

The only easy day was yesterday. – Unknown

Anything worth doing is worth over doing. Moderation is for cowards. – Shane Patton

If you ain’t cheating, you ain’t trying. Meaning: In combat, the larger force dictates the rules… and Navy SEALS are ALWAYS the smaller force. To win they need to break the rules. – Unknown

Put your mind in neutral and your ass in gear. – John Parrish

If you’ve never met a Navy SEAL and you ran into one at a bar, you probably still wouldn’t know he’s a Navy SEAL. – Howard E. Wasdin

Navy SEALs Say when you are under pressure you don’t rise to the occasion. You sink to the level of your training. Train well. – Jon Gordon

As you move outside of your comfort zone, what was once the unknown and frightening becomes your new normal. – Robin S. Sharma

We’re not going to stop until we get at least one quitter. – Unknown

Don’t back down from the sharks. – Unknown

GET UP. AND. GO. Take the risk, take the gamble, take the first step. Take action. And don’t let another day slip by. – Jocko Willink 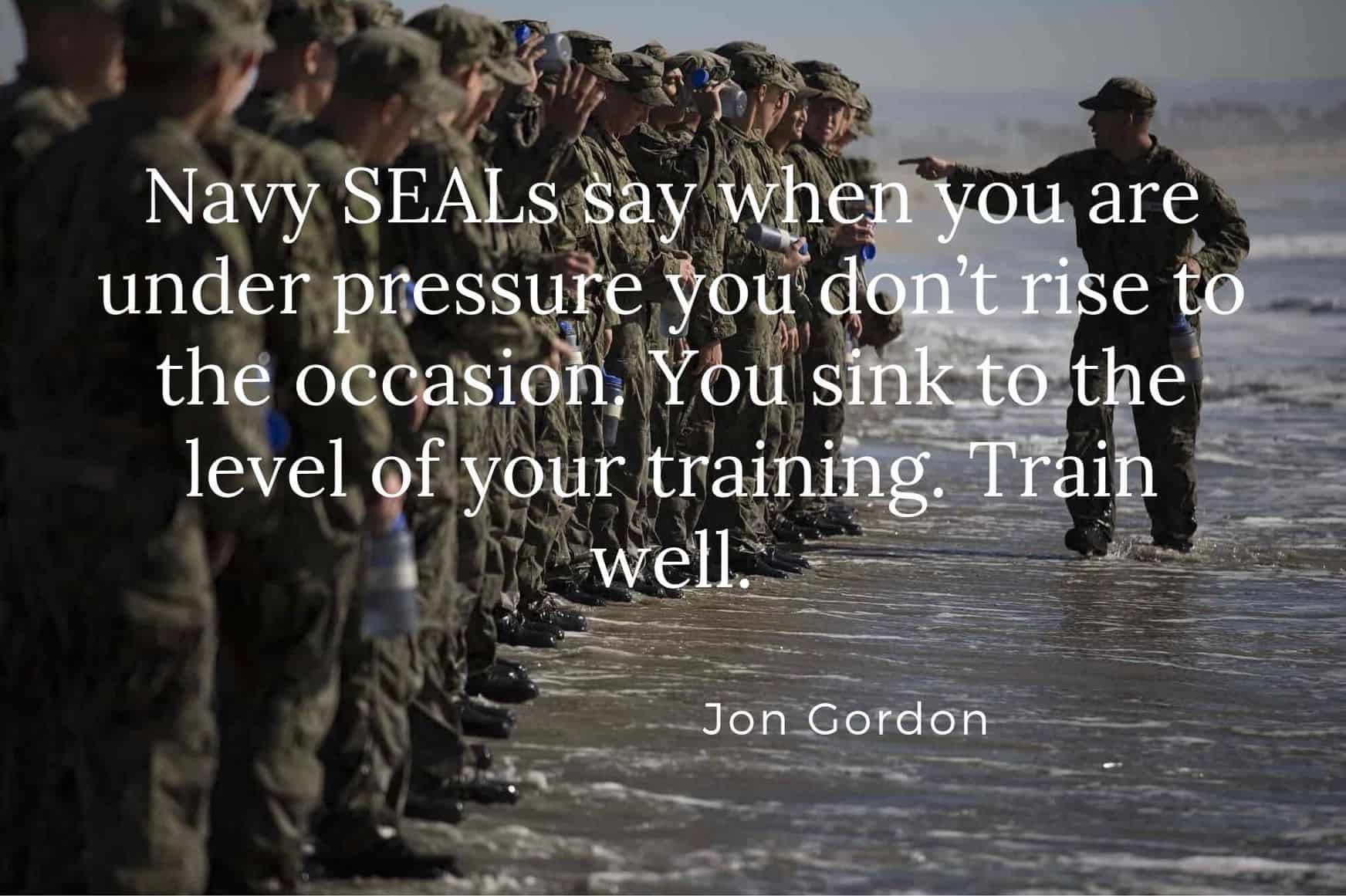 You’ve only got three choices in life: Give up, give in, or give it all you’ve got. – Unknown

There is nothing we like to communicate to others as much as the seal of secrecy together with what lies under it. – Friedrich Nietzsche

I see upon their noble brows the seal of the Lord, for they were born kings of the earth far more truly than those who possess it only from having bought it. – George Sand

Heroes represent the best of ourselves, respecting that we are human beings. A hero can be anyone from Gandhi to your classroom teacher, anyone who can show courage when faced with a problem. A hero is someone who is willing to help others in his or her best capacity. – Ricky Martin

I have to face the final battle by myself, maybe lonely, maybe desolate, maybe against formidable odds. But I was not giving up. – Marcus Luttrell

You’ll never know your limits until you push yourself to them. – Unknown

A leader must lead but also be ready to follow. – Jocko Willink

They could beat you, run you, make you endure untold cold and pain, and kill you… but they could never make you quit. – Walter Diaczenko

Sometimes you have to slide down the obstacles head first. – Unknown

Our greatest weakness lies in giving up. The most certain way to succeed is always to try just one more time. – Thomas Edison

The more you sweat in training, the less you bleed in combat. – Unknown

The Great Seal was an early proclamation of ‘humanitarian intervention’, to use the currently fashionable phrase. – Noam Chomsky

It’s all mind over matter, if I don’t mind, then it doesn’t matter. – US Navy SEAL’s

There’s a storm inside of us, a burning river, a drive. You push yourself further than anyone could think possible. You are never out of the fight. – Marcus Luttrell

Extraordinary people are the Green Berets and the Navy Seals and the Olympic athletes – these are the ones who can face these extraordinary physical challenges and be triumphant. – Jonathan Demme

Individuals play the game, but teams beat the odds. -Unknown

Life is a battle. At least, for most people. – Unknown

There are no bad teams, only bad leaders. – Jocko Willink

You need to train harder and longer than your enemies to survive. It’s not luck that makes Navy SEALS the most elite combat unit in the world – It’s hard work on a daily basis. – Unknown

Don’t be afraid of the circuses. – Unknown

A good Navy is not a provocation to war. It is the surest guaranty of peace. – Theodore Roosevelt

As one of my more famous teammates is known to say, “Can’t Quit, Not Dead!” That is the kind of motivation you need to get through training! –  Roger Guerra

One of the great things about the SEAL teams in particular, and the American military in general, is the tremendous diversity of backgrounds and experience that people bring to their service. – Eric Greitens