Our collection of motorcycle quotes is not just simple quotes about motorcycling. These words are a Biker’s way of life. Enjoy reading! 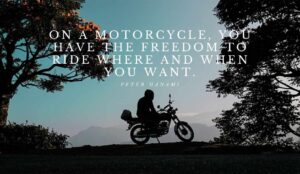 Riding a motorbike requires focus and concentration on each control element of the race, clutch, gears and stops. This is an exciting adventure – to ride in the open wind in the early morning or late afternoon. Each of us has a moment of our life when we feel depressed, depressed or feel lonely. Take your bike and ride pull gas and go on a trip. It will make you feel free and amazing! Riding a motorcycle is the best feeling! – Unknown

It wasn’t until I went to college and I got my first motorcycle that I understood the thrill of speed. – Vin Diesel

Animals travel on all fours. Mankind on two. Motorcycling is not a means of transport but an ideology, a nomadic way of life. – Amit Reddy

At the end of the day, it’s still a show about guys, who ride extremely fast motorcycles for a living. – Doug Liman

Whatever it is, it’s better in the wind. – Ralph Waldo Emerson

Calling upon my years of experience, I froze at the controls. – Stirling Moss

I enjoy going on motorcycle trips and stopping in small towns and enjoying drinks with the locals. – George Clooney

I really love to ride my motorcycle. When I want to just get away and be by myself and clear my head, that’s what I do. – Kyle Chandler 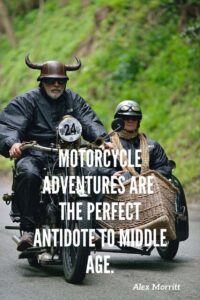 I look my best when I take my helmet off after a long motorcycle ride. I have a glow and a bit of helmet hair. – Eric Bana

There are two kinds of riders: Those who have crashed and those who will. – Unknown

I think it’s particularly a distinctively American concept that resonates with American culture through biker culture. A motorcycle is an independent thing. You’re like, I don’t want to ride in a car with this person. I want to be independent and ride by myself. But, let’s ride in a group. Let’s be independent, together. – Ryan Hurst

The older I get, the faster I was. There are old bikers and there are bold bikers, but there are no old, bold bikers. – Evel Knievel 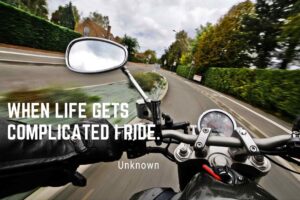 If I ever go onstage at the Oscars, you can guarantee I’ll be wearing my motorcycle boots. – Dean Winters

Life may begin at 30, but it doesn’t get real interesting until about 150. – Unknown

Because in the end, you won’t remember the time your spent working in the office or mowing your lawn. Start your ride, climb that god damn mountain. – Unknown

Racing is life, anything before or after it is waiting. – Steve McQueen 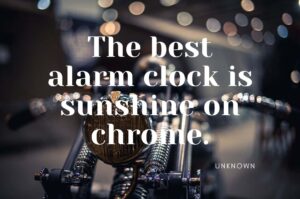 You live more for five minutes going fast on a bike than other people do in all of their life. – Marco Simoncelli

On a motorcycle, you can’t really think about more than where you are. There’s a freedom that comes with that – from stress, worry, sweating the small stuff. – Laurence Fishburne

The only good view of a thunderstorm is in your rearview mirror. – Unknown 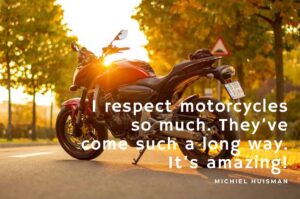 Try to remember the reason you started riding a motorcycle in the first place. For me it was a couple of things but mostly rebellion. – Sonny Barger

Race the rain, ride the wind and chase the sunset, – only a biker understands. – Unknown

If you can still hear your fears, shift a gear. – Unknown

I asked God for a bike, but I know God doesn’t work that way. So I stole a bike and asked for forgiveness. – Emo Philips 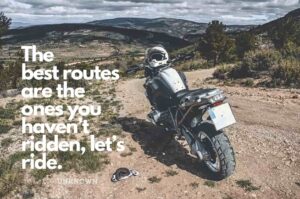 If the bike isn’t braking properly, you don’t start by rebuilding the engine. – Unknown

Sometimes it takes a whole tankful of fuel before you can think straight. – Unknown

Driving a motorcycle is like flying. All your senses are alive. – Hugh Laurie

If you want to get somewhere before sundown, you can’t stop at every tavern. – Unknown

When you’re wearing a motorcycle helmet, people don’t know who you are. So I just wander around and, yeah, it’s pretty awesome. – Zac Brown

If you want to live a happy life, don’t teach your wife how to drive a car or a motorcycle. – Junaid Jamshed 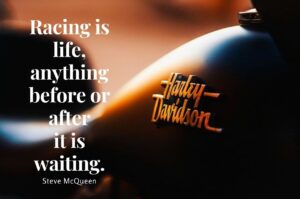 Sometimes you really need a crooked road, to get your head straight. – Unknown

Gray-haired riders don’t get that way from pure luck. – Unknown

I have this vintage Harley-Davidson motorcycle jacket. When I put it on, it has this supercool feeling to it. – Alicia Keys

Only a biker knows why a dog sticks his head out of a car window. – Unknown

Sometimes the fastest way to get there is to stop for the night. – Unknown

When life gets you down, remember its only one down and the rest is up. – Unknown

I respect motorcycles so much. They’ve come such a long way. It’s amazing! – Michiel Huisman

A motorcycle is an independent thing. – Ryan Hurst

Take the journey, soar like an eagle, there are so many roads to explore in a very little time. – Unknown

That’s all the motorcycle is, a system of concepts worked out in steel. – Robert M. Pirsig

The only thing better than a street bike – is a woman riding one. – Unknown

A woman who rides a motorcycle is in tune with the universe, a candidate for high adventure. – Celestine Sibley

Note to self: Never ride a motorcycle in stilettos and a miniskirt. – Maggie Grace 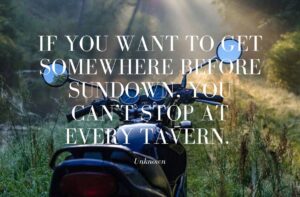 A bike on the road is worth two in the shed. – Unknown

My first car was a motorcycle. – Adam Carolla

I drive way too fast to worry about cholesterol. – Unknown

People are like Motorcycles: each is customized a bit differently. – Unknown

All girls like guys who are tough. Obviously, riding a motorcycle – I don’t want to say that there’s a bad boy quality – but there’s definitely a tough and macho thing about a guy who rides a motorcycles and that element of danger. That’s really sexy. – Marisa Miller

If you can’t get it going with bungee cords and electrician’s tape, it’s serious. – Unknown

Whatever it is, it’s better in the wind. – Unknown 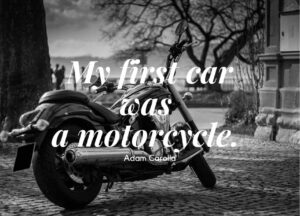 My dad is a motorcycle guy, not some Hollywood dude. – Shia LaBeouf

A cold hamburger can be reheated quite nicely by strapping it to an exhaust pipe and riding forty miles. – Unknown

On a motorcycle, you have the freedom to ride where and when you want. – Peter Hanami

Keep your bike in good repair: motorcycle boots are not comfortable for walking. – Unknown

Why is Jim the only one in the plant to have money… Because he rides the new Harley Hummer. – Harley Davidson 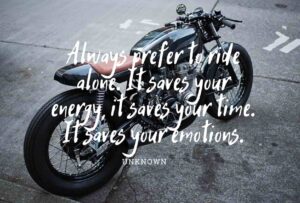 I just wear jeans, big motorcycle boots and T-shirts that are way too big for me. I like anything that has lived a little bit, that has traces of life on it. Knitwear that’s a tiny bit too long because you’ve pulled it with your hands, or jeans that are starting to get holes. – Clemence Poesy

I like life on the road. It’s a lot easier than civilian life. You kind of feel like you’re in a motorcycle gang. – Leonard Cohen

Why are motorcycle dealers closed on Sundays? Because, Sunday is for worship. Catholics go to church, Motorcyclists go to the track. – Justin Skalka 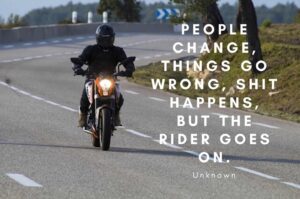 On my tombstone they will carve, “It never got fast enough for me. – Hunter Thompson

I learned one thing from jumping motorcycles that was of great value on the golf course, the putting green especially: Whatever you do, don’t come up short. – Evel Knievel

You’re the guy that’ll be sneaking out of your bedroom at three o’clock in the morning to look at your bike. – Paul Teutul

The perfect man? A poet on a motorcycle. – Lucinda Williams

Riding faster than everyone else only guarantees you’ll ride alone. – Anonymous

A motorcycle can’t sing on the streets of a city. – Unknown 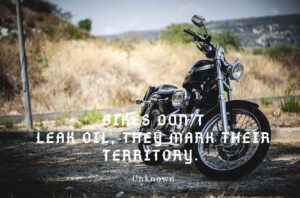 Guys are so predictable. They can’t seem to separate fantasy from reality, so I get a lot of bikers and race car drivers hitting on me. They’re all just playboys, so they don’t interest me.  – Michelle Rodriguez

If the person in the next lane at the stoplight rolls up the window and locks the door, support their view of life by snarling at them. – Unknown

No ride is too long when you have a good company. – Unknown

Thin leather looks good in the bar, but it won’t save your butt from “road rash” if you go down. – Unknown

The most important thing is to have a good relationship with the motorbike … you have to understand what she wants. I think of the motorcycle as a woman, and I know it sounds silly, but it’s true. – Valentino Rossi

I like loud bikes and i cannot lie. – Unknown

Patience is something you admire in the driver behind you and scorn in the one ahead. – Mac McCleary

The brand is not important, the fact that you ride is. – Unknown

Riding a motorcycle on today’s highways, you have to ride in a very defensive manner. You have to be a good rider and you have to have both hands and both feet on the controls at all times. – Evel Knievel

Anybody can jump a motorcycle. The trouble begins when you try to land it. – Evel Knievel

The best alarm clock is sunshine on chrome. – Author Unknown

The feeling when you ride is like no other feeling. You feel free from the world, you feel unstoppable, riding is a passion, it’s a joy, it’s a stress reliever, it’s a way of life. – Unknown

If you wait, all that happens is that you get older. – Larry McMurtry

When I was old enough to ride a motorcycle and got my license, I bought a ’69 Sportster. – Chuck Zito

Life is not about waiting for the storms to pass: it’s about learning how to ride in the rain! – Unknown

The best routes are the ones you haven’t ridden, let’s ride. – Unknown

98% of all Harleys ever sold are still on the road. The other 2% made it home. – Unknown

What do you call a cyclist who doesn’t wear a helmet? An organ donor. – David Perry

Some people say it might be good for your career to die and then come back again. I have died many ways, car crashes, motorcycle crashes, etc. But, I am still alive. – Mark-Paul Gosselaar

When I ran for governor, I told all the bikers, “You don’t need to worry about me bringing in a helmet law. It’s your option because you as a motorcycle rider that’s your option. It doesn’t come with the bike. – Jesse Ventura

It was only a motorcycle but it felt like a mode of being. – Rachel Kushner 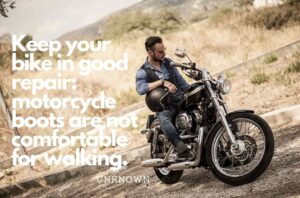 If I weren’t doing what I’m doing today… I’d be traveling around the world on the back of a motorcycle. – Donna Karan

Riding a motorcycle on today’s highways, you have to ride in a very defensive manner. You have to be a good rider and you have to have both hands and both feet on the controls at all times. – Evel Knievel

Catching a yellow-jacket in your shirt at seventy miles per hour can double your vocabulary. – Unknown

Driving a motorcycle is like flying. All your senses are alive. Being house is like flying, too. He’s free of the gravity of what people think. – Hugh Laurie

It’s amazing the number of great people in my life that I wouldn’t have ever met if it wasn’t for motorcycles. – Unknown

When life gets complicated I ride. – Unknown

“I don’t really feel like going for a ride today” – said no motorcycle rider ever. – Unknown

More books, more racing and more foolishness with cars and motorcycles are in the works. – Brock Yates